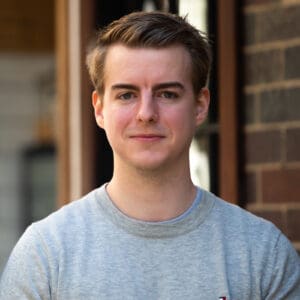 Which celebrities are the most influential in the NFT world?

The growth in popularity of non-fungible tokens (NFTs) has been rapid and remarkable throughout 2021 and they have quickly become an essential asset for investors around the world. An NFT is a unique digital file, often in the form of a simple image that is stored on the blockchain so that the owner has public proof of original ownership.

One of the reasons that NFTs are becoming more popular is celebrity influence, with many high profile names both trading and creating NFTs. It is now not uncommon for some of the world’s most famous faces to have thousands of dollars worth of NFTs in their portfolio.

But which celebrities are making the biggest waves in the NFT space, and which collections are they most interested in? By studying the most prominent celebrities in the NFT world, the most influential have been revealed.

Celebrity entrepreneur Mark Cuban is one of the richest men on the planet with an estimated net worth of $4.3 billion. He is a man with fingers in many pies, including television shows, business interests, and his NBA team the Dallas Mavericks. Now he is also by far the celebrity with the largest NFT portfolio, with his total collection worth over $500 million.

The second most valuable NFT celebrity wallet belongs to Gary Vee, whose portfolio is valued at over $107 million. Vee (whose real name is Gary Vaynerchuk) transitioned from a wine critic to becoming one of the biggest names in the crypto and NFT world.

Rapper Snoop Dogg is one of the best-known celebrities to have taken to the world of NFTs, and his personal portfolio is now worth just under $20 million.

YouTuber Logan Paul is a man with a lot going on, between being one of the most famous faces on the video-sharing site, fighting one of the greatest boxers of all time, and causing international controversy, he has found time to build one of the most valuable celebrity NFT portfolios. Currently, the value of his NFTs is just under $5 million.

Although he is nowhere near as famous as his wife Serena Williams, Alexis Ohanian, the investor and co-founder of Reddit currently, has a portfolio valued at almost $4 million.

Celebrities with the most NFTs 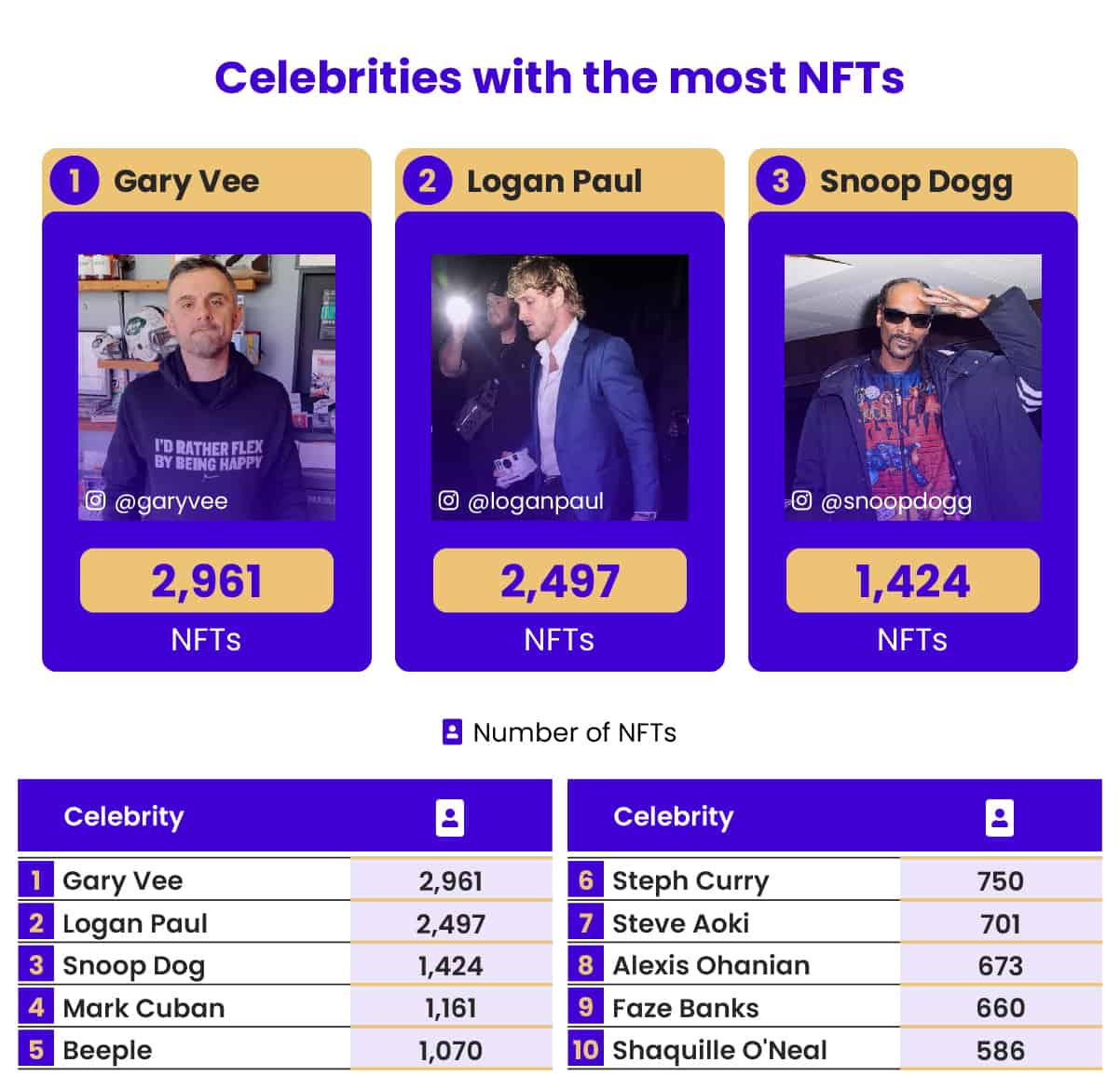 Whilst his portfolio is only the second most valuable one, Gary Vee owns the most NFTs of any celebrity. He currently has almost 3,000, which is 2,504 more than the average amount owned by all the celebrities studied.

A close second is Logan Paul who currently owns just under 2,500 NFTs in his portfolio. Paul is only one of two celebrities to own over 2,000 NFTs.

Snoop Dogg has more than 1,000 fewer NFTs than Logan Paul, however, this is still enough to rank third for the number of NFTs owned by a celebrity.

Snoop Dogg has the single most valuable NFT worth an astounding $3.37 million. His ‘CryptoPunk#3831’ is the crown jewel of his collection.

Gary Vee’s most valuable NFT is the second-highest of any celebrity. Just like Snoop Dogg, his most expensive NFT is a Crypto Punk, number 2424. The value of this NFT is estimated at $2.84 million.

Yet again a Crypto Punk is the single most valuable NFT owned by a celebrity. Logan Paul owns ‘CryptoPunk#2294’, and this has an estimated value of $1.29 million. This makes him the only other celebrity to own an NFT worth over $1 million. 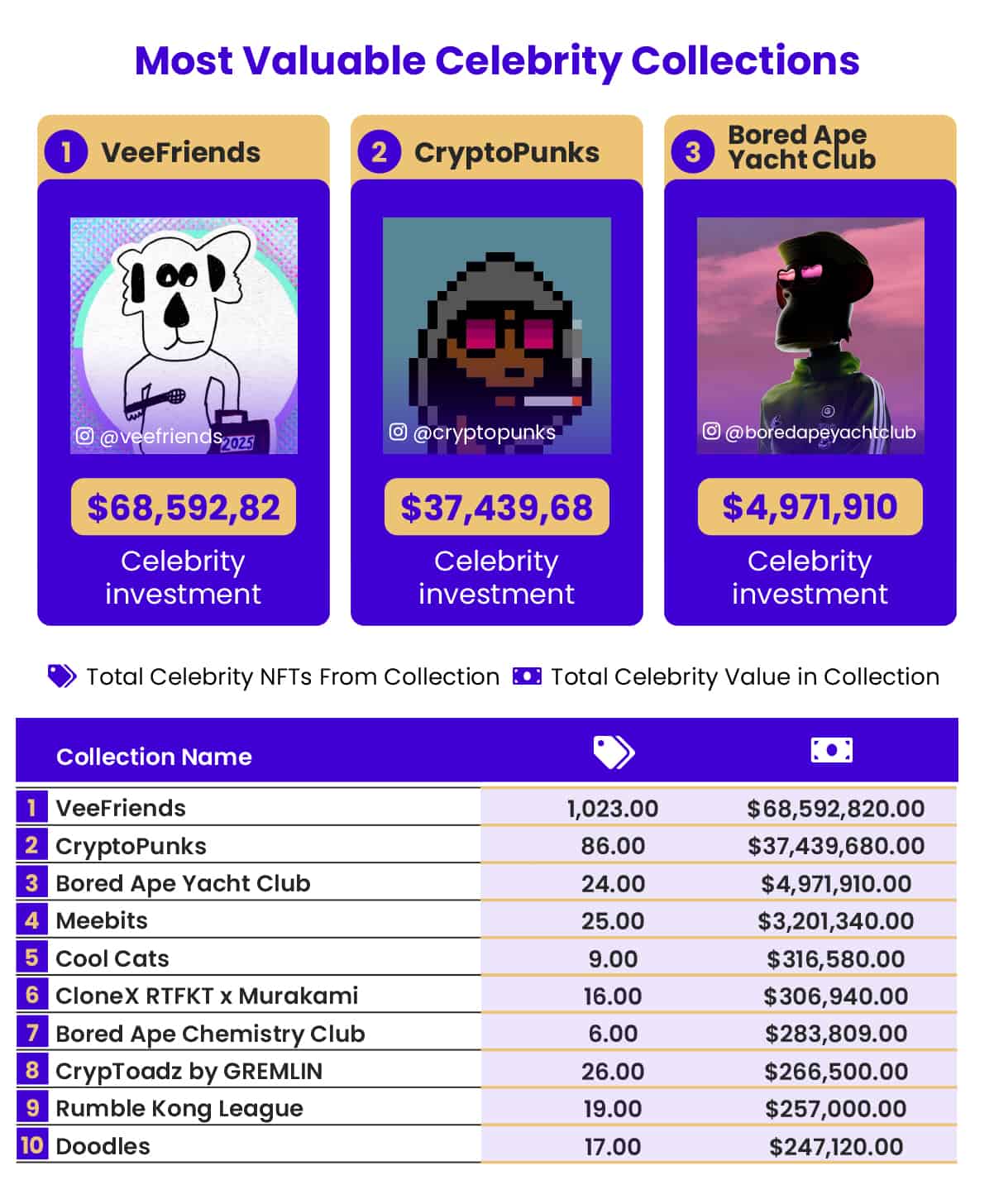 The collection that celebrities have invested the most in is VeeFriends, over $68 million of celebrity money has been invested in these NFTs. In total 1,023 are owned by celebrities such as Logan Paul, Beeple, and Steve Aoki. However, the biggest investor in VeeFriends is its creator, Gary Vee himself. Vee owns 1,018 NFTs from his own collection, valued at $68,260,000.

CryptoPunks has the second highest amount of celebrity investment, as over $37 million has been invested by nine different celebrities. The vast majority of CryptoPunk celebrity owned NFTs belong to Gary Vee who has invested $21,770,000 in 59 of them, rapper Snoop Dogg owns ten, collectively worth $9,390,000.

Eleven celebrities have invested in 24 Bored Ape Yacht Club NFTs, and this has been enough to propel it to third place in the rankings with just under $5 million worth of celebrity investment. Gary Vee again owns the most with seven, making him the only celebrity with over $1 million worth of Bored Ape Yacht Club. Other celebrity owners include: Jimmy Fallon, Post Malone, and Stephen Curry.

The most influential celebrities 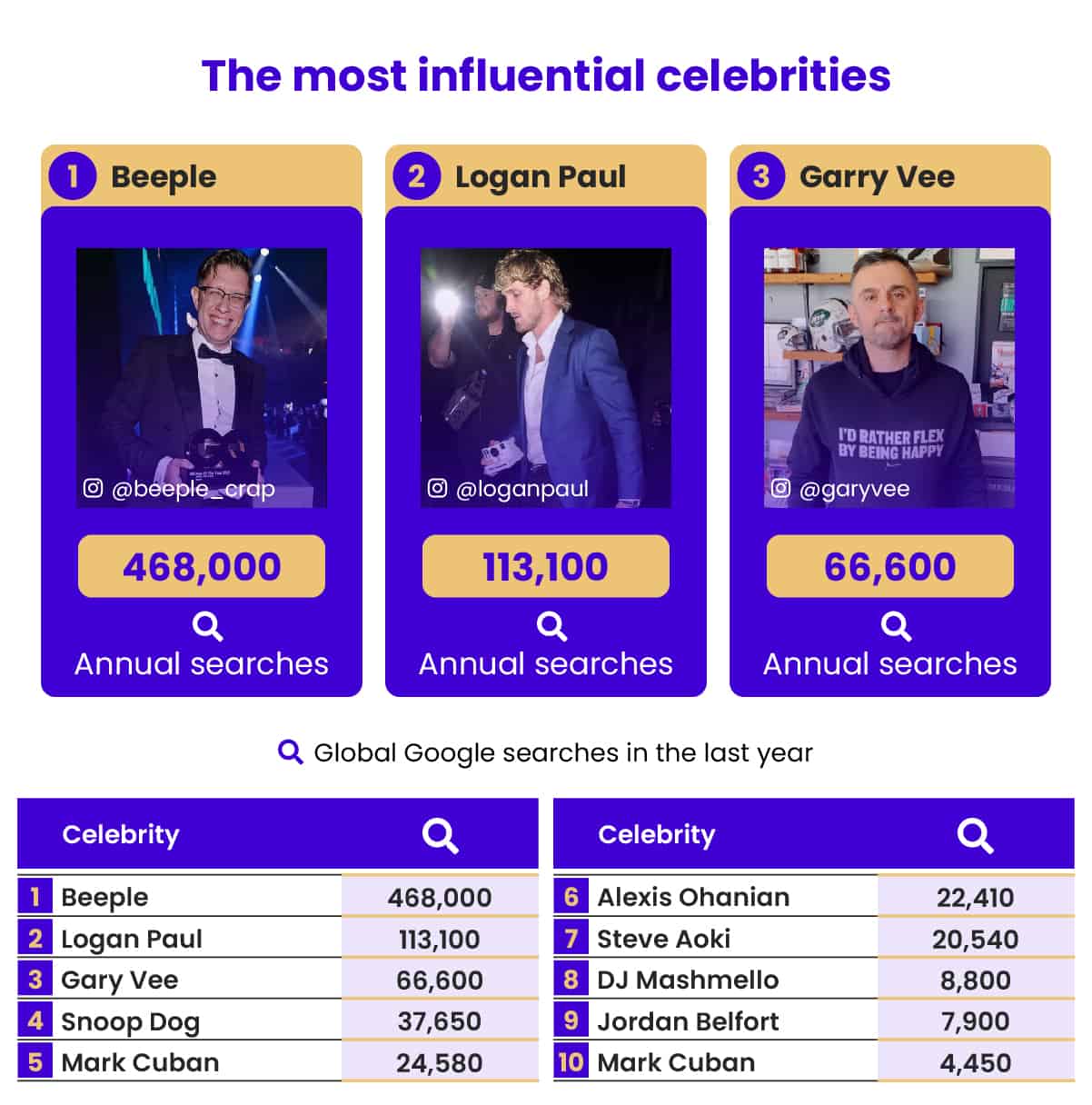 Mike Winklemann, professionally known as Beeple, is a digital artist and a creator of NFTs, as well as an avid purchaser. He received the most interest online in the past year with 468,000 NFT related searches on Google, suggesting that he has made the most impact in the NFT space.

Logan Paul’s proclivity for purchasing NFTs has certainly been noticed by the public, as NFT related Google searches for his name were the second-highest of any celebrity. Paul had 113,100 searches, making him the only other celebrity with six-figure search totals.

Gary Vee can boast 66,000 NFT related Google searches this year as his influence reverberates in the NFT community.

We collated a list of celebrities influential in the NFT space from various articles, articles including:

* We decided to only use Ethereum NFTs, and therefore only looked at celebrities ETH wallets.

Some celebrities have hidden wallets, but to better compare them only celebs public accounts were looked at.

We then used DappRadar to find their NFT portfolio data:

Google keyword planner revealed the number of global annual searches for the terms ‘[Celebrity] NFT’ between December 2020 and November 2021.

As NFT prices fluctuate often and celebrities are adding to their collections constantly, it is worth noting that data was collected between the 23rd and 30th November 2021.

Adam Morris
Linkedin
Adam is a crypto expert who has been researching and writing on the topic since 2017. He’s spoken on crypto podcasts and has been featured in many prominent media publications such as Yahoo & Coindesk. Adam’s first experience with NFTs was in 2017 when he was breeding cryptokitties to try and get the rare jaguar trait – with no success!